Roger DeHart, a Broward County Sheriff’s Court Deputy is taking steps, in fact, lots of steps to shine a light on the human trafficking epidemic in the U.S. Roger, the founder of First S.t.o.p Inc. – Saving Teens and Others from Predators, is making the journey to increase awareness in our communities.  First S.T.O.P Inc. helps provide education to teens and vulnerable individuals about human trafficking.

In addition to awareness, this journey is for survivors of trafficking. Roger wants to show survivors that men stand against trafficking.  In a recent interview with the Santa Ynez Valley News, Roger said in reference to his trek, “I wanted to be the face so that other males can step up and say, ‘We need to be the voice for survivors and victims of human trafficking.'” When men, especially those in law enforcement speak out against the commercial sex industry and become a voice for sex-trafficking victims and survivors, it sends a strong message.

Victor Williams, retired Special Agent from Homeland Security Investigations in Miami, is one of the instructors for ERASE’s law enforcement program. In class, Victor is known for asking, “If prostitution is considered the world’s oldest profession… doesn’t that make men the world’s oldest customer?” The point Victor is making is that typically men are the driving factor behind prostitution. “There is no way to know if someone is working independently or is being forced to work in the commercial sex industry until there is a closer look at the situation. If forced to work in the commercial sex industry or if someone is under 18 years of age, that is human trafficking.” Victor also expresses to the officers and agents in the class, “To have an effect on the human trafficking epidemic we need a mindset change. There needs to be a cultural understanding of individuals forced into the commercial sex industry.” Learn More

Roger DeHart has been a Court Deputy for over 22 years and like many in law enforcement, once he learned about the horrors of human trafficking right here in the U.S., he was moved to do something about it. Roger decided on doing a Human Trafficking Awareness Walk. A 5k walk nor a marathon provided the impact Roger wanted to make. He planned a walk that was over 1000 miles in hopes to bring national attention to the problem.

Last year Roger walked from Broward County to Washington D.C. shining a light on problems surrounding human trafficking. Along the way, many people came out to greet him, bring him water, share a meal and even walk with him for parts of his journey. During these encounters, the focus of conversations was about human trafficking and what it truly looked like. People learned more in-depth information about sex trafficking and labor trafficking thanks to Roger DeHart’s walk.

This year to continue his impact on ending the trafficking of people, Roger decided to go to California. California has the most amount of calls to the National Human Trafficking Hotline.

Currently, Roger is well into his walk there. He is traveling by foot, 650 miles down the California Coastline. People have come out to support his hard work and provide encouragement for the remaining part of his travels. Pictures and videos from Roger’s walk along the coast have been showing up in social media feeds.  Once again people are coming out to show their support. 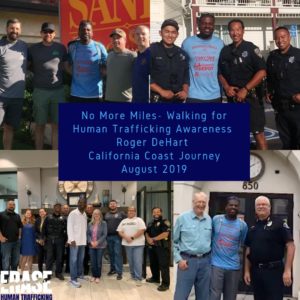 We send lots of encouraging thoughts and well wishes as Roger continues to raise awareness in his unique yet very powerful way. Roger is a great reminder that people can do different things in different ways to help in the fight against human trafficking. Thank you Roger DeHart!