Below are some sectors and audiences for which ERASE provides training: 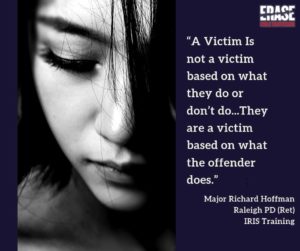 A 24-year veteran of law enforcement, Rick Hoffman has worked in every division of the Raleigh Police Department, as well as with the district attorney’s office as an investigator. He has over 17 years of experience training officers as a certified police instructor.

Hoffman’s ongoing passion is to develop collaborative anti-human trafficking operations over a range of state, local, and federal agencies. As the Human Trafficking Coordinator in Raleigh, he was responsible for developing a consistent and proactive response to trafficking cases. Even in retirement, Hoffman serves as a consultant with multiple law enforcement agencies and victim service providers.

A native Spanish speaker, Hoffman possesses a unique opportunity to reach out to and connect with Spanish speaking victims of human trafficking. He’s heavily involved with creating public awareness in Raleigh and is a member of the city’s Rapid Response team.

Victor Williams is a respected figure in law enforcement with over 30 years of domestic and international experience. He joined the U.S. Customs Service in 1991, which later reorganized into the Department of Homeland Security, Immigration and Customs Enforcement in 2003.

In February 2011, Williams was assigned to the Office of the Special Agent in Charge Miami, Human Trafficking Group. There, he served as the Coordinator for the South Florida Human Trafficking Task Force until his retirement in December 2017. During that time, he coordinated a vast number of human trafficking cases with other local, state, and federal law enforcement agencies, along with the help of various non-governmental and faith-based organizations.

Williams has traveled to the International Law Enforcement Academies in Hungary, Botswana, and Vietnam to educate law enforcement officers from all over the world on how to prevent human trafficking, protect victims, and prosecute traffickers. He’s helped police departments and prosecuting attorneys in the Bahamas and Jamaica to establish their own anti-trafficking programs.

Shanika is a mother, nurse, advocate, and survivor. Having once being the victim of childhood sexual abuse and human trafficking she has a testimony of resilience. Her life’s experience has cultivated a mission to empower and change the world. With all that she does for the community one of her greatest services is a mother to her children and community children as well. Shanika has found her voice and that is what she uses to shed light into the lives of others.

She speaks publicly to bring awareness, change, and hope. Ms. Ampah credits education and her medical career to sustaining a positive pathway as a survivor. With nineteen years in the medical field, Shanika Ampah seeks to continue her endeavors. Currently employed as a Licensed Practical Nurse for Vitas Hospice, an Outreach Coordinator at the University of Miami T.H.R.I.V.E Clinic, and Kristi House as a Survivor Leader she dedicates her work to serve the most vulnerable populations.

Shanika Ampah is the Founder and Director of a 501c non-profit, Guiding Light Outreach Inc. which serves the community as a beacon of light against human trafficking and sexual assault. As a survivor leader and advocate works alongside many community stakeholders to bring awareness about this darkness that she has overcome. Ms. Ampah is an alumni of the National Human Trafficking Training and Technical Assistance Center (NHTTAC) in which she was a fellow of the Human Trafficking Leadership Academy. As a keynote speaker of many amazing platforms, Shanika still finds her passion in speaking at high schools, college events, and assisting in training our local professional about human trafficking. Shanika states she is no longer a vulnerable, voiceless victim, what she survived has equipped her to help others, and now that she is an overcomer she has the strength and purpose to shine light into darkness.

Detective Hernandez has been a police officer with the San Bernardino Police Department since 2006. During her career, she has been assigned to the Crime Impact Team, Graffiti Task Force, the Violent Crimes Task Force, and the Vice/Narcotics Unit. In January 2016, she was assigned as the Vice Detective and began working cases involving the commercialized sex trade, including Human Trafficking, Pimping and Pandering.

In March 2017, she received the Meritorious Service Medal for her work in combating human trafficking. In 2017, she was assigned to the San Bernardino County Human Trafficking Task Force, which is managed by the San Bernardino Sheriff’s Department and includes investigators from local, state, and federal agencies.

In May 2018, she was nominated for Officer of the Year by the San Bernardino City Chamber of Commerce for her continued work in Human Trafficking, including successful prosecutions and training for the community and first responders. Detective Hernandez instructs at the San Bernardino Sheriff’s Department’s Advanced Officer Training Center, California POST, and California Narcotic Officers’ Association.

In August 2019 Detective Hernandez, was the recipient of the California Narcotic Officers’ Association, Alfred E. Stewart Award, Region V for her distinguished and dedicated service in combating human trafficking.

National Hotline
If you know of or suspect someone who is involved in human trafficking, you can call the national hotline for confidential help and information at 1 (888) 373-7888