Major Timothy Belcher of North Miami Police Department opened the class by thanking the officers and their departments for sending them to the training.  Dr. Kimberly McGrath and Dr. Ebony Coney of Citrus Health’s CHANCE Program, spoke about Commercial Sexual Exploitation of Children and the trauma victims endure. This information helps officers better understand why victims of human trafficking rarely self-report or identify as being a victim.

In the area of human trafficking and child exploitation, many different crimes can occur. These crimes can be prosecuted on a state or federal level or both. For a more in-depth and locally relevant understanding, State Assistant State Attorney, Kristy Nunez and Assistant United States Attorney, Barbara Martinez presented to the class. Both discussed human trafficking and related laws, case studies, and components needed for a prosecutable case.

When investigating human trafficking, it’s essential to utilize the Victim-Centered Approach.  “A victim-centered approach seeks to minimize retraumatization associated with the criminal justice process by providing the support of victim advocates and service providers, empowering survivors as engaged participants in the process, and providing survivors an opportunity to play a role in seeing their traffickers brought to justice.” -OJP/OVSTTAC

This was reinforced during the three days of class not only by the instructors but also by a human trafficking advocate and survivor, Shanika Ampah. Ms. Ampah talked with the officers and reminded them that survivors of sex trafficking are victims, not criminals. She took questions and offered her insight on how they can better connect with victims. Ms. Ampah also spoke about available resources that officers can share with victims. The Thrive Clinic is a multidisciplinary clinic for human trafficking survivors and Kristi’s House, is a child advocacy center with programs for human trafficking victims. These are just two of the many resources available in South Florida.

Over the three days of instruction, officers learned about different technologies available to them that assist in identifying and investigating human trafficking crimes. There was hands-on experience with software made available at no cost to law enforcement by Thorn.  Practical tools and techniques that can result in arrests of traffickers and purchasers of commercial sex, was demonstrated. How to conduct different types of human trafficking operations was also on the agenda. Case studies were reviewed that covered many of the different components officers had learned over the three- days of training. Labor Trafficking, Illicit Massage Parlors, and Domestic Servitude were additional topics covered in the class. 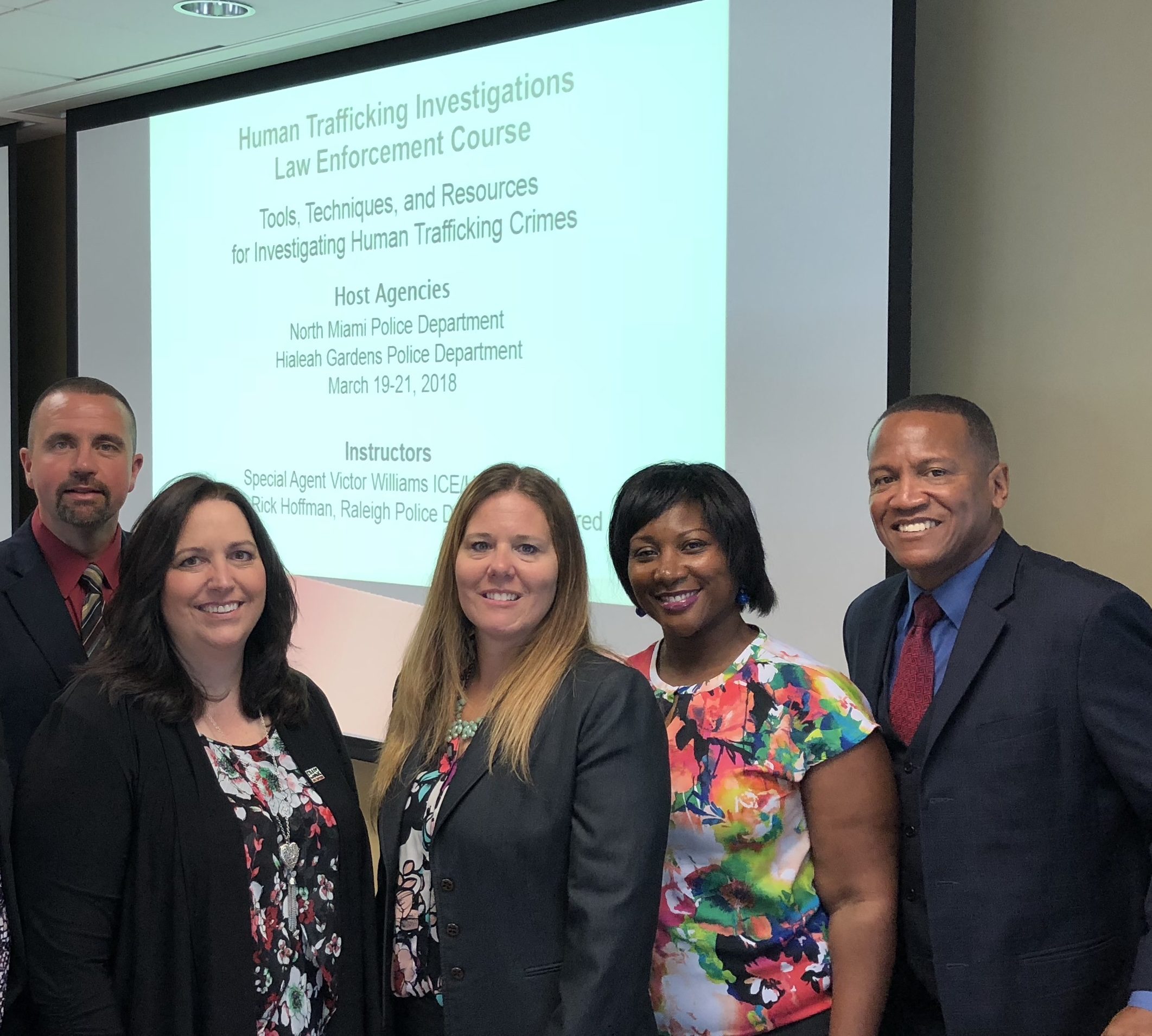 The instructors for the class were Special Agent Victor Williams ICE/HSI, Retired and Major Rick Hoffman, Raleigh Police Department, Retired. The class was donated to the officers by ERASE Child Trafficking.