Human trafficking statistics in the US continue to rise. Unfortunately, statistics often diminish the humanity they are meant to define. At the core of these statistics is a human being who experienced an event, milestone, or tragedy. They are your sons, daughters, neighbors, and friends.

The Bleak Statistics Of Human Trafficking Are Scary And Real

Every year traffickers lure children and vulnerable individuals into forced labor or sex trafficking situations. This problem isn’t exclusive to other countries. It happens here, in the United States, every day. Victims can come from any walk of life. Traffickers will prey on vulnerable children from runaways, troubled teens, to a child left alone. Traffickers are experts at their jobs – often appearing like normal people in your community waiting for the right opportunity to profit from the selling of a child.

In a global study by the United Nations, identified trafficked persons originated from 106 countries. Of over 17,000 victims, 28% were children, with girls outnumbering boys. According to the National Center of Missing and Exploited Children, of the more than 23,500 endangered runaways reported in 2018, one in seven were likely victims of child sex trafficking.

What do these numbers mean, though? 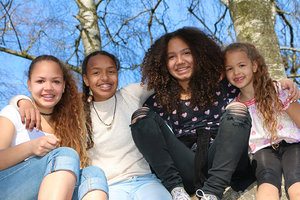 There are several organizations each year work to capture the statistics surrounding human trafficking. How many cases of sex trafficking were reported, how many cases were prosecuted, or how many calls from labor trafficking victims were reported? They focus on this work to show the need for more services for victims and better training for professionals who come in contact with victims. Often community leaders want to know the number of victims in their area to decide if resources should be dedicated to investigating human trafficking crimes.

One would think when talking about the horrific situations involving children and human trafficking that numbers would not make a difference. That there would be more of an outcry for just a handful of children, much less thousands of children. Unfortunately, that is not what is happening. Despite countless news stories daily most people still feel that child trafficking could not happen in their neighborhood.

What if the trafficked person was someone a Police Chief knew or a neighbor of the Mayor’s, would that make a difference? What if the person buying sex with a child was a co-worker or a community member, would that make a difference?  Do we need to debate the statistics when people become a commodity?  Those who only see the numbers, not the lives and families attached to them, more than likely have not been educated on what human trafficking really looks like. With awareness and education, we all should feel one child trafficked is one too many.

World Day Against Trafficking In Persons